It is commonly unknown to many that hangover headaches are a 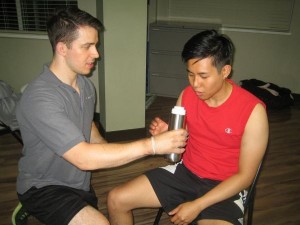 direct result of dehydration in the body after a night of alcohol consumption. When alcohol is consumed, it goes into the bloodstream and results to blocking the creation of vasopressin, the antidiuretic hormone. Without this hormone, water is sent directly to the bladder instead of the kidney for reabsorption, thus resulting to frequent urination. The morning after alcohol binging, the body sends signals to the brain to replenish its water supply. Headaches occur due to the body’s organs getting water from the brain causing it to shrink in size and pull on the membranes that connect the brain to the skull, consequentially leading to pain. Moreover, the dehydration caused by frequent urination results to low levels of sodium and potassium, also leading to headaches.

The body needs water to function. It is in fact known that the body is made up of approximately 50% to 70% water. Therefore, when there is excessive loss of body fluids, mostly water, dehydration occurs. In dehydration,more water is moving out of the cells and eventually out the body than the amount taken in. It is important to intake more water than to lose water.

It is normal to lose water every day in different forms, such as water vapor during expiration and water in urine, stool and sweat. Salts are also lost along with water but in much smaller amounts. When excessive amounts of water are lost, the body may become unbalanced or dehydrated. Severe dehydration can be lethal.

There are many causes of dehydration in adults. Fever, exposure to heat and too much exercise may lead to continued fluid loss. Infections may lead to vomiting, diarrhea and increased urination. Various diseases such as diabetes are also associated with rapid fluid loss. Injuries to the skin may also lead to dehydration by water loss through the damaged skin, such as in burns, mouth sores or severe skin infections. And as previously mentioned, alcoholism may also lead to dehydration.

Numerous symptoms may occur when there is mild to moderate dehydration. Some of these include dry, sticky mouth, thirst, reduced urine output (for infants, no wet diapers for three hours, or for older children, no urine output for eight hours or more), dry skin, headache, tiredness, sleepiness, constipation and dizziness. Severe cases of dehydration are characterized by very dry mouth, skin and mucus membranes, extreme thirst, little or no urine output (if there is, it is dark yellow or amber in color), lack of sweating, fast pulse, fast breathing, low blood pressure and fever. Delirium and loss of consciousness are observed in very serious cases.

To treat dehydration, not caused by heat stroke, give the person two quarts of fluids, such as water, fruit juices or sports drink in two to four hours. Avoid giving caffeinated drinks as they are diuretic. If dehydration is caused by vomiting or diarrhea, drink small amounts more frequently. It is advisable to drink diluted juice or rehydration solutions in cases of excessive vomiting and watery diarrhea as water dilutes minerals in the body.

It is necessary to treat dehydration in order to avoid serious damage to the body. First aid training teaches anyone on how to properly administer treatment in cases of medical scenarios. Through first aid classes, symptoms for these scenarios will be easily identified and treatment can be given immediately to prevent further damage from befalling on the patient.