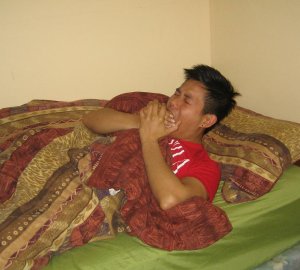 Whooping cough is another highly contagious bacterial infection; however, there is the vaccine to treat the condition.

Children who are too young to get vaccinated and unvaccinated people have higher chances of getting infected with whooping cough. It causes a severe cough. This is where it gets its name from.

Most cases of whooping cough occur in children less than 5 years old, but the majority of carriers may be of the older age groups. It is believed that adults are one of the major sources of infection to infants.

Many people tend to reach adulthood without having been infected by whooping cough. This makes it possible for adults themselves to develop whooping cough as well. Next to infants, the people who have higher risks of suffering from serious complications due to whooping cough are the elderly and those with chronic health problems.

The disease may take 1 or 2 weeks to show its signs. Most people become infectious to others within seven days and they remain contagious for almost another month. The disease is very contagious. Therefore, you are advised to avoid direct contact with others as you are capable of infecting others.

Whooping cough starts off with symptoms reassembling a common cold, with upper respiratory symptoms, and then progressing to a cough. You will find yourself having fits of coughing that you can’t stop to catch your breath.

The symptoms are nonspecific, which usually makes doctors fail to suspect it. Whooping cough will be high on the list if that whoop sound is present in the patients cough. It sounds like a gasping intake of breath after coughing out all the air from your lungs. If there’s no “whoop” sound, it will most probably go unrecognized, as there are no other significant signs or symptoms.

As whooping cough is a bacterial infection, it can be treated with the right antibiotics. Erythromycin, a family of antibiotics will usually be used. Erythromycin should be taken for 2 weeks or as the doctor prescribes.

If your doctor recommends the usage of antibiotics, you should take them as instructed and finish the course. It is vital to follow the doctor’s instructions, as the doctor feels that antibiotics are necessary. It is vital to take them on time to build and maintain the optimal antibiotic levels especially among children. Missing a dose or stopping too soon may sometimes cause a relapse. This is to prevent antibiotic resistance in bacteria from the stopping and starting of the usage of antibiotics.